Flows are a fundamental construct in the ValueFlows ontology. The types of flows form a progression from potential to scheduled to realized:

Intents describe potential future events which have not been agreed to by other agents, such as offers and requests. Intents are often used for discovering another agent to participate in a desired event. On the process side, for example, planned work could be an Intent, but planned work that some agent committed to is a Commitment.

Economic Events describe past events, something observed, never some potential future event. They can fulfill Commitments or satisfy Intents (when there is no Commitment).

Claims resemble Commitments, but are initiated by the receiver, not the provider. An Economic Event can trigger a reciprocal Claim. Claims sometimes do not have to actually be saved, often they can be implied from an Economic Event and an Agreement. For example, if Alice has agreed to sell Bob some carrots for $2, then if Alice delivers the carrots to Bob, she has a claim for $2 from Bob.

The figure below shows that Economic Events have to be observed and for that reason only appear as records of the past. Future plans get represented with Intents and Commitments. 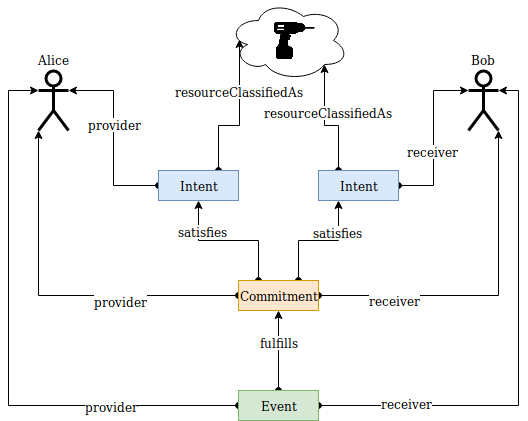 Intents, Commitments, and Economic Events can occur at any granularity that is needed or for which data can be obtained. So they primarily are used for all operational needs, but can also be used at higher levels for budgeting for organizations, analytical and high level planning needs for communities or regions, etc. 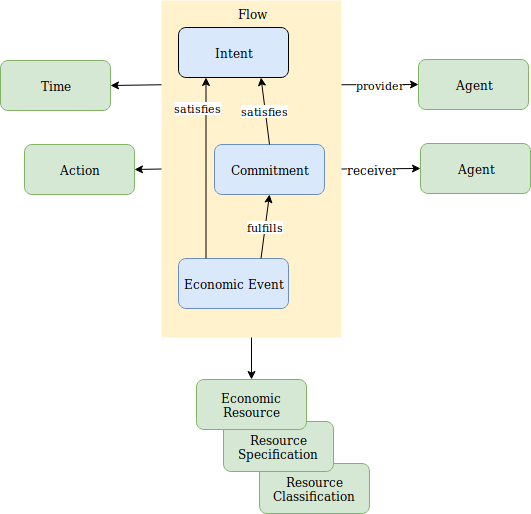 All flows use an action property to designate what the flow is doing and how it will affect an economic resource (or not). Actions are defined as follows.

We have defined a core set of actions, but expect that this will be extended with some others. If extended, they should be defined as part of this or another formal vocabulary so that all can use them and assume the same meaning.

(1) The actions use and work are time-based actions, either with or without an explicit schedule. If the schedule is documented as part of the economic resource, then those economic events could decrement that schedule, although not the "current quantity" of the resource.

(2) The actions transfer and move can optionally define a second identified resource on the receiver side.

(3) The action deliver-service can sometimes be an input to another process, at the same time as it is an output from a process. This is because services imply delivery as they are created.

Quantities are used for counting, such as:

Times are used for coordination and scheduling, such as:

They can be used together for analysis and reporting, such as:

Quantities can be any needed unit of measure, including counts, volumes, weights, etc. Time can be a beginning/end time (an interval), or a point in time, or a due date. The flows require at least one of those. If a point in time is recorded, an application should return that time as the beginning and end time.

Note that recipes may need to scale both quantities and calendar times when used to create a plan.

Sometimes a quantity is expressed in time-based units, like "I worked 6 hours", or "we used this machine for 8 hours". These flows also will have a related time, like "I worked from 10am to 4pm", or "we used this machine from 8am to 4pm". In these examples, the quantity is used for accounting figures, exchange, recipes. The time is used to schedule and coordinate the work or machine usage.

Sometimes a situation may call for a "compound quantity", like "Number-per-Year".

Display note: The OM2 ontology defines a Unit called one that is used for one-dimensional units. This is confusing for many economic applications, where something like each would be used, or nothing at all. We recommend that user interfaces handle this by not displaying the unit one where it would be confusing, or substituting a more applicable name.